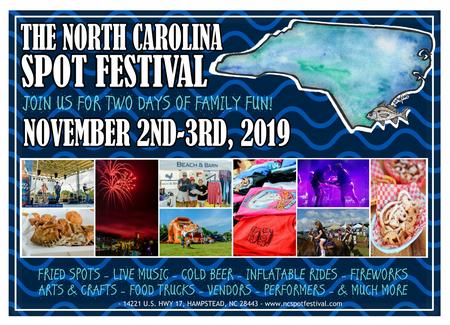 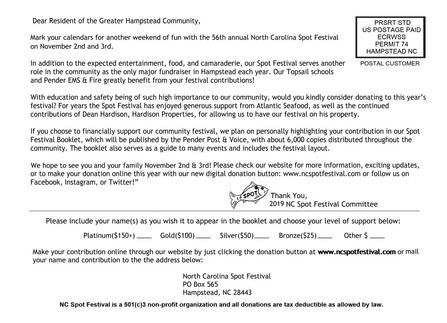 ​​The first spot festival was held in 1963. The thought of the Spot Festival developed at a community oyster roast. In 1983 the festival was being held in front of The Hampstead Community Center. JH Lea and Sons was a major sponsor when the festival started and continued to donate all the Spot fish for our event until 2008 when they closed their doors after providing Hampstead with fish for over 90 years. In 2009 Atlantic Seafood became the provider of the Spots and still is today. When it began 50 years ago, the nonprofit event benefited the fire department, and it still does today. Proceeds from the festival are divvied up between the fire department and the five “Topsail” schools in the Pender County school system. Every year the festival is filled with– live music, scholarship pageantry, arts, and crafts, lots of stuff for the kids to do, plus, of course, those delicious spot, fried just right by Hampstead Fire Department fire men and women. The Spot Festival is one of the most important events in Hampstead, it brings thousands of visitors to our community every year.

Fun Little Tidbits from the 1964 Spot Book!!
● Shrimp is the best bait to use for catching Spots.
● Best time to fish for Spots is just before day break right after bad weather.
● The north side of the pier is the best place to catch Spots.
● Ice caught fish well, one hour off ice after fish is out of water can sour him.
● Spot fish is the leading fish in the Carolinas
● In the 1920’s spot fish were not sold commercially
● In the 30’s spot were sold in a bunch not pounds.
● In the 40’s Spot would not bite a hook.
● In the 50’s Spot became the leading seller in the south.
● In the 60’s more Spot were sold than any other fish, when in season.